Bridge construction building that can minimize the effect on traffic

▲Bridge girder fixed on the bridge piers
(The road running below is the Tomei Expressway.)

The inbound and outbound lines between the Gotenba and Numazu Interchanges on the Tomei Expressway were closed from 19:00 on Saturday, November 18 to 7:00 on Sunday, November 19, 2006.

The steel bridge was about 200 meters long and weighed about 1,800 tons. In this project, in the course of one night, we moved it 71 meters and then placed and temporarily fixed it onto the bridge piers. This was one of the largest-scale horizontal movement works performed in Japan. The project was quite unique in that the inbound and outbound lines had to be moved horizontally at the same time and loaded onto the bridge piers on the same day. On the outbound line in particular, where construction work had to be performed ahead of the inbound line, we had to perform everything on time without wasting a second.

In order to move such a heavy object in a limited time during the night, we considered every possible situation and performed numerical simulations to confirm certainty and safety

What is most important, however, is onsite practical ability.

The guidance of the client Central Nippon Expressway Company, and the skills and teamwork of the staff members of the affiliated companies and the joint venture provided support for the construction work to ensure its perfection. 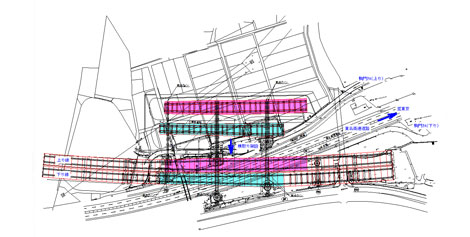 ↑Click on the figure to display an enlarged image in a separate window.